On the 30th anniversary of Lennon’s assassination (Dec. 8 1980)  I used high power projectors to shine light onto the old A-Mill in Minneapolis, proclaiming “One world one people,” as a tribute to Lennon’s dream. This project came out of a desire to use public art as a way to inspire thought and compassion. 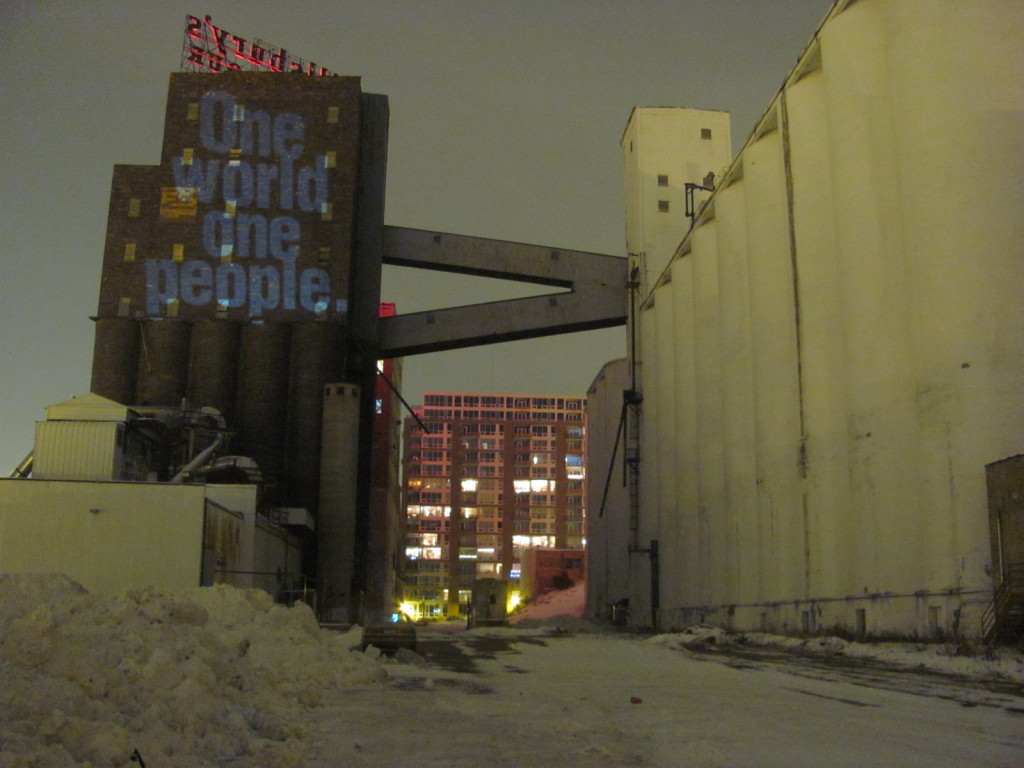 Here are his own words:

PLAYBOY: The album will end with the chant we heard today, “One World…”

PLAYBOY: Another kind of-

PLAYBOY: Is that when hard times will be over – when we become one world, one people?

LENNON: No, no, no. We are one world, one people whether we like it or not. Aren’t we? I mean we can pretend we’re divided into races and countries and can carry on pretending that until we stop doin’ it. But the reality is that it is one world and it is one people.

PLAYBOY: The step after “Imagine”…

LENNON: That’s the way it is really. “Imagine” said, “Well, can ya possibly imagine it?” “Consider this!”

PLAYBOY: And now that you’ve considered it…

LENNON: Now that you’ve considered it…

LENNON: [Excitedly] Yeah, right! Right! But I don’t want it to come across like “I am…” or “We are the awakened spirit. You are the sheep that will be shown the way…” It’s not that. And that is the danger in saying anything, you know.

PLAYBOY: Especially for you, because people are looking…

LENNON: They are looking for leaders. Don’t follow leaders, watch yer parking meters…[Chuckling] We’ll get into that, but you know, leaders is what we don’t need. We can have figureheads, we can have people we admire and like to have standing up and all that. We can have examples…But leaders is what we don’t need. It’s the utopian bit again. We’re all members of the conceptual utopia. So let’s no got round and round it: It’s one world, one people, and it’s a statement as well as a wish. [Laughing softly] So welcome to the dress rehearsal for “Double Fantasy”.